During the Holidays, Existing Customers are More Valuable than New Ones

Extensive research by Optimove’s Data Lab reveals that holiday business from established customers is more valuable, in both the short term and the long term, than business from new customers.

For online retailers, the winter holiday season represents an enormous window of opportunity for both new user acquisition and customer retention. And yet, the allocation of marketing investment between the two fronts is a strategic challenge. On the one hand, new customers typically mean new growth. On the other hand, there’s huge (and often untapped) potential in existing customer bases. Uncovering the shopping tendencies of these two groups is key to forming a well-grounded holiday marketing strategy.

We turned to Optimove’s database of hundreds of millions of customers from more than 180 brands representing a variety of verticals to examine the characteristics of repeat versus new customers during the holidays. We examined millions of transactions performed between Thanksgiving and December 31st, for three consecutive years. Our research strongly indicates that during the holidays, repeat customers are a much stronger asset for e-tailers than new customers who made their first purchase during the season.

The distribution of transactions according to transaction amounts clearly demonstrates that new customers tend to purchase at the lower end of the spectrum, whereas repeat customers’ relative majority is pronounced at the highest transactions.

We also looked at what happened to the shoppers – both repeat and new – in the year following their holiday purchase. It appears that repeat customers not only buy more during the holidays – they also tend to retain a greater loyalty to the brand. During the next year, the number of repeat shoppers who made at least one more purchase with the brand was 160% higher than that of new customers.

The new customers who do come back to make additional purchases tend to become weaker repeat shoppers compared to their more senior counterparts: during the 12 months following their holiday shopping they make 60% less additional purchases with the brand compared to repeat shoppers. If, for example, a new holiday shopper who kept on buying had 2 more order days during the following year, an equivalent not-new holiday shopper had ~3.5 more order days.

Our overall holiday shopping analysis defines the following dynamics: existing brand customers are much better shoppers with the brand compared to new shoppers. Between Thanksgiving and New Year’s Eve, repeat shoppers buy with the brand more items in more transactions, and maintain their loyalty to the brand more often and more intensely than new, incidental shoppers.

New shoppers pan out as much weaker assets for online retailers, with pointedly lower transaction amounts and number of items bought, and a lower tendency to become repeat customers themselves—our data shows that new customers who make their first purchase during the holidays have lower survival rates than new customers who make their first purchase during any other period. First-time holiday customers turned into repeat customers 19% less frequently. When they do become repeat customers, the number of their additional transactions with the brand is dramatically lower than that of those who were already repeat shoppers prior to the holiday season.

But when looking at the total rise in transaction levels for online retailers during the holiday period, it is largely created by new business, rather than by repeat customers, during the most expensive time of year for the overall cost of user acquisition.

In the meanwhile, repeat customers who prove to harbor much more potential remain a largely under-tapped asset. 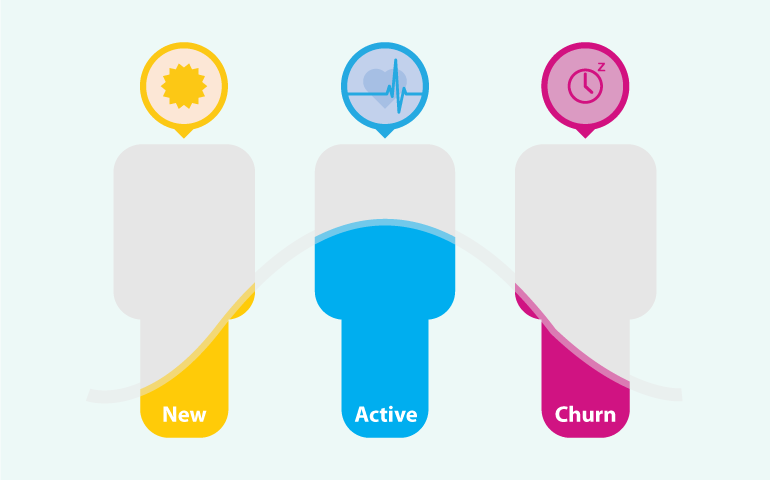 The Lifecycle Stages of an Online Shopper